The National Wallace Monument is one of Scotland’s most recognisable iconic buildings. 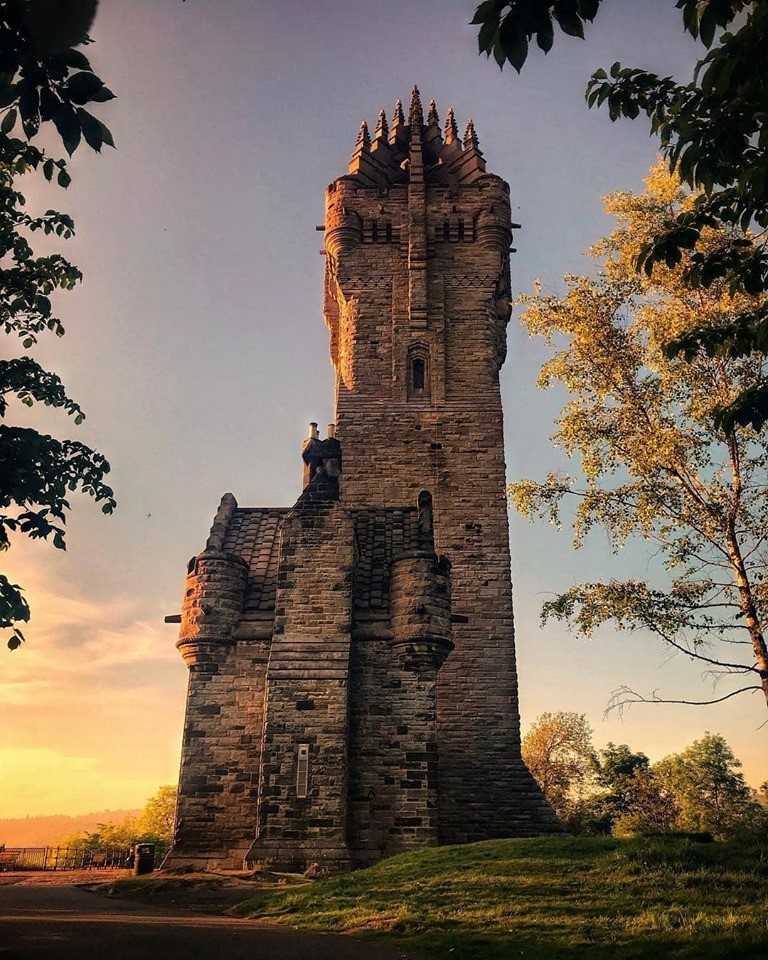 The monument in Stirling was opened in 1869 to commemorate the life of the Scottish patriot and martyr Sir William Wallace, and has attracted visitors from near and far ever since.

The National Wallace Monument is a tower standing on the shoulder of the Abbey Craig, a hilltop overlooking Stirling in Scotland. It commemorates Sir William Wallace, a 13th-century Scottish hero.

The three exhibition galleries within the Monument, and the Crown at the top of the building, are accessed via a spiral staircase, with a total of 246 steps. Visitors unable to use the staircase can use the facilities in the Keeper’s Lodge, at the entrance level. Height: 220′ tall. Erected 1869

30,000 tonnes of stone was used in the construction of the Monument. That’s the equivalent of 10,000 elephants.

William Wallace was a pretty big man his height was 6 foot 7 inches and he was a giant of a man, although it is said that it was impossible for a man of that stature to exist when the average height was just over 5 feet.

Tyranny and terror were the tools being used by England to rule Scotland. Occupied and oppressed, the Scottish nation sought a hero to challenge the cruelty of King Edward I.

Someone to take the campaign for freedom into battle, and on to victory.

When the two countries faced each other at the Battle of Stirling Bridge in 1297, Scotland was led to victory by a figure destined to become a national hero – William Wallace.

A hero of Scotland and a true patriot, he had a burning desire for peace and freedom which united the country’s clans, gained the loyalty of its people, struck fear into his enemies and defied the cruel hand of an evil, warring and invading King – Edward I of England.

All the drama of Wallace’s campaign for freedom is captured at the world-famous National Wallace Monument – proudly standing on the Abbey Craig, overlooking the city of Stirling.

Much of William Wallace’s life remains a mystery as historians disagree over the facts surrounding the hero’s eventful life.  The exact circumstances of the patriot’s birth are unknown but it is believed that he was born around 1270, either at Elderslie near Paisley or Ellerslie in Ayrshire, into a minor noble family

The Battle Of Stirling Bridge

As a result of Wallace’s rising, John de Warenne, the Earl of Surrey, was ordered to march north by King Edward I in September 1297. Warenne had a huge force of heavy cavalry and was anticipating a victory.

Stirling was the main entry point to the north of Scotland, so it was here, just north of Stirling Bridge, on the Abbey Craig that Wallace encamped with his army.

The bridge (which stood 180 meters upstream from the 15th century stone bridge that still stands today) was only wide enough for two horsemen to pass abreast, and it would have taken the English army hours to cross.

On the 11th September the battle began as the English were forced to cross the bridge.  Wallace and Andrew de Moray waited until more than half the English had made the crossing before springing their trap.  Scottish spears men charged down the causeway.  Those on the right flank forced their way along the river bank to the north end of the bridge, preventing the English from escaping.

Those on the south bank of the river, including Warenne, retreated to Berwick.  From those trapped on the north side, more than 100 men-at-arms and 5,000 Welsh infantry were caught and slaughtered by the Scottish forces.

After his betrayal and capture, Wallace was taken to London, where he was tried.  He was found guilty, hanged, disemboweled, beheaded, and quartered on 23rd August 1305.

Wallace’ death did not end Scotland’s Wars of Independence. Robert the Bruce continued the fight and achieved victory at the Battle of Bannockburn in 1314.

You can even book a night at the Seaview Cottages right next to the distillery buildings.

Wallace’s sword is proudly on display in The Hall of Arms, the first floor gallery inside The National Wallace Monument.