There are over 120 active distilleries spread across Scotland, which are split into five whisky-producing regions; Campbeltown, Highland, Islay, Lowland and Speyside. Where a whisky is made can have a huge bearing on its flavor, everything from the source of the water to the presence of peat in the local area will come through in the taste. Speyside is home to some of Scotland’s most beautiful scenery and lush landscapes.

For the Scotch whisky enthusiast, Speyside has much to offer. The region is the heart and soul of Scotland’s whisky kingdom. There is a lot of history here and a lot of whisky, and both are worthy of further exploration

Over half of Scotland’s malt whisky distilleries can be found in Speyside, the northeast corner of the Scottish highlands. The lush, fertile valley of the River Spey is undoubtedly the heart of single malt whisky distilling in Scotland.

Speyside gets its name from the River Spey, which cuts through this region and provides water to many of the distilleries the abundance and quality of its water is the principal reason why whisky distilleries have flocked to the Speyside region. The region’s water has the lowest level of dissolved minerals of any region in Scotland. Speyside’s lack of accessibility, at least until the mid-nineteenth century railroad boom, had the added benefit of keeping the “gaugers,” the whisky excise tax collectors, a comfortable distance away.

Speyside whiskies showcase classic flavors of honey, vanilla, and ripe green fruits like apples and pears, combining to create whiskies that are both sophisticated and elegant. Those that are aged in sherry casks, with age, inhale and absorb the deep-rooted flavor remaining in that wood, and mature to deliver a range of dried fruit and savory spice flavors. These whiskies are beautifully balanced between sweet, honey, light caramel notes and floral aromas, but on occasion can even exhibit a pronounced smoky character.

The Speyside region was the source of the first Scotch whisky boom. In August 1822, King George IV made a highly publicized trip to Edinburgh. While there, he discovered the illicit whisky being produced in the district of Glen Livet in Speyside. It is not entirely clear whose whisky the King tasted. The distillery that today bears the name “The Glenlivet” hadn’t even been founded yet. Unfortunately, like most Highland whiskies, it was unavailable outside the Highlands.

The King’s passion for Scotch whisky from the Highlands, and from the Speyside district of Glen Livet in particular, created a national awareness of the superior quality of Highland whiskies. The association of Scotch whisky with the British monarchy would continue throughout the nineteenth century. In 1835, William IV granted the first royal warrant to a whisky producer—Royal Brackla. He declared it his favorite whisky. Queen Victoria was also a strong proponent of Scotch whisky. She granted royal warrants to both Royal Lochnagar and Royal Brackla, both Highland whiskies (hence the designation “royal” in their names), and gave a standing order that all royal coaches should carry a bottle of whisky under the coachman’s seat in case of an “emergency.”

The Speyside distilleries are often sorted by specifying the river they are near (Spey, Bogie, Deveron, Findhorn, etc.), or by the whisky-producing district where they are located: Bogie, Livet, Deveron, Dufftown, Fiddich, Findhorn Valley, Inverness, Isla, Lossie, Rothes, and Strathisla.

Speyside whiskies are the bestselling and most well-known of all Scotch whiskies. From Speyside come such iconic brands as The Macallan, Glenfiddich, and The Glenlivet. These three brands typify the characteristic Speyside “style” or “template,” even though they each have very different aroma and flavor profiles. The three are also the most popular Scotch whisky brands in the United States.

From small scale producers who handcraft whisky using traditional methods to some of the most famous distilleries in the world, Why not follow the renowned Malt Whisky Trail and visit some of the area’s top whisky attractions? Or visit during the famous Spirit of Speyside Whisky Festival in April/ May, and get involved in some of the unique whisky events in the festival’s packed program.

You could even discover the craft that goes into making whisky casks at the fantastic Speyside Cooperage.

The best way to understand Speyside and its 50 odd distilleries is to organize them into four broad groupings:

These whiskies are crisp and fragrant. They are great as aperitifs with a clean, fresh aftertaste. They will often feature ripe, crisp, green fruit flavors of apples and pears with floral aromas and a hint of sweetness. Good examples of this style include Knockando, Glenlivet, and Glen Spey. Glenfiddich 12-year-old has some sherry cask matured malt in its blend, but would also fit in this category. The proliferation of finishes, however, has meant that a distillery’s range will often cross over into other categories. The Glenlivet Nadurra Oloroso Cask or Nadurra First Fill Oak Cask expressions would not belong in this category.

These whiskies are medium bodied. The fruit flavors are softer, more overripe, bordering on baked or cooked. The wood spice is more pronounced with distinctive vanilla and baking spice aromas. The sweetness is heavier, more honey-like, and sets off the spice elements nicely. If the first category is reminiscent of a bowl of ripe fruit, then this category is more like a baked fruit pie. Good examples include Cardhu, Cragganmore, Glen Elgin, and Glendullan.

These whiskies have deep, rich, sweet flavors. Fruit flavors emphasize dried fruits and nuts, typically with pronounced sherry notes. They have a substantial mouth feel and weight on the palate. The sherry influence here is unmistakable, although the impact of the sherry cask can vary dramatically between those expressions that are matured exclusively in sherry casks (The Macallan, Abelour A’bunadh), those that mature only a portion of the bottling in sherry casks or only finish in sherry casks (Abelour, Balvenie, Glenfiddich), and those that use a combination of sherry butts.

The latter expressions typically use a Fino or Oloroso cask followed by a sweet Pedro Ximenez cask to add a broader range of flavors and more layered complexity (Glendronach). In some cases, the proportion of sherried malt is increased in older expressions to produce a more pronounced sherry influence (Glenfiddich, Abelour). Other notable distillers with this house style include Linkwood, see especially the Signatory specialty bottlings, and BenRiach’s Pedro Ximenex expression.

This style of Scotch whisky is more typical of the western islands and the Highlands than it is of Speyside. Although peat is found in Speyside and has been used there from time to time, its use in the local whisky industry had largely died out long ago. Nonetheless, there are a number of distillers that produce peated expressions in Speyside. Not surprisingly, these whiskies feature varying degrees of smoke and peat. Speyside peat tends to be drier, earthy, and more floral, like a faded potpourri rather than the marine, phenolic iodine of Islay and the western Highlands. 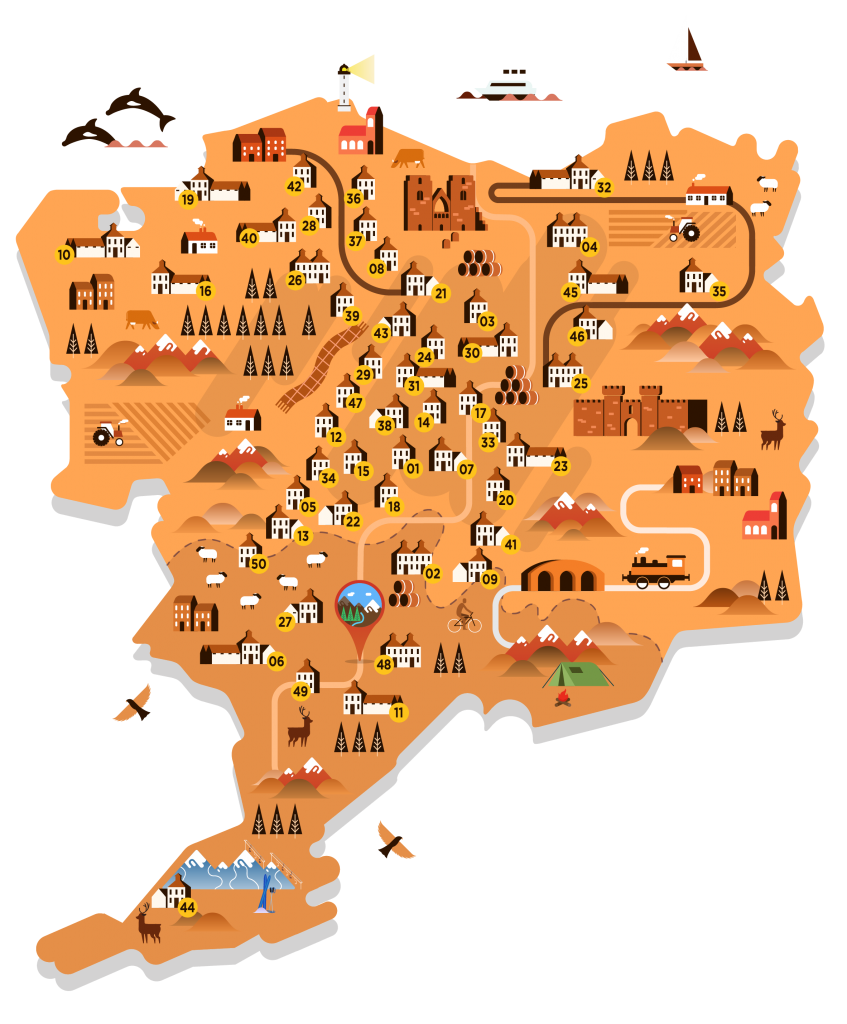