The Pot Still is currently owned by the Murphy family pictured above, but let me tell you a bit about the rest of the families who have ran the bar.

The first tenant recorded was John Hill, a wine and spirits merchant who operated the premises in 1867.

William McCall and his family were the first family to own the bar back in 1886 when it was called McCall’s bar. The bar seen several generation of family and friends of the McCall at the helm right up until the early 1960’s when the Tennents Caledonian breweries group took over. Tennents made extensive alterations and refurbished the pub including the addition of the lounge at the back in 1971.  The bar was run by Tennents managers until 1981 when the bar was taken over and The Pot Still was introduced.

The Waterstone family took over the bar in 1981. The father/son team John and Paul Waterstone and made some alterations and were the first to introduce the name The Pot Still and started the whisky bar with over 300 bottles on the gantry.  The family owned the bar until the early 1990’s when manager Ken Storrie took his turn behind the bar.

The Storrie’s were the next family to have their time in this whisky institution. Kenny and his wife Sandra, started as the managers and quickly took over as the least holders and increased the whisky stock to over 500 bottles.  Kenny went on to win the SLTN Whisky Bar of the Year 2003 & 2004 and Whisky Magazine’s,  Whisky Icons Whisky Bar of the year 2005, 2006 & 2007 and cemented  The Pot Still’s worldwide reputation as THE whisky bar to visit in Glasgow.  The family hired a new bar manager in late 2003 and the first Murphy started work – Frank Murphy. The Storrie family owned the bar until Kenny’s sad passing in November 2010.

Here come the Murphy’s!!  So as we already said Frank Murphy started here in late 2003 as the manager and quickly got his sister Geraldine involved with helping out with some shifts behind the bar and the rest they say is history.

The Murphy family have been involved with the bar ever since with various brother, sisters and cousins have their time behind the bar.  The family took ownership on 28th Nov 2011 with dad Brian, Brother Frank and Sister Geraldine in the driving seat.  We  have went from strength to strength continuing the family run tradition of The Pot Still, and the bar now boats over 700 whiskies from all over the world on the bulging gantry.  We were delighted to celebrate both The Pot Still’s 35th anniversary and our 5th anniversary in Nov 2016, we were also amazed to win both the Scottish Dram Awards Whisky Bar of the Year and Scottish Field magazine’s Whisky Bar of the Year Award in 2016 and The SLTN Whisky Bar of the Year 2017.

We hope you will come and visit us in our delightful little corner of Glasgow and we hope to continue the good whisky work for as long as we can.

A Glaswegian legend and Scotland’s best-known malt whisky pub, the redoubtable Pot Still has been trading in spirits since the middle of the 19th century – although it really took off during the 1980s when the landlord introduced a list of more than 300 different names from renowned distillers large and small. These days, the range spans everything from Aberfeldy and Antiquary via Oban and Old Elgin to White Horse and Whyte and Mackay – all lined up on an impressive gantry in the bar. The Pot Still also champions Scottish real ale, with representatives from Broughton, Borders, Tempest and the Ayr Brewing Company on the pumps, while the grub is honest home-cooking for the tipplers. Given its location in the city’s theatre district, it’s no surprise that the Pot Still is a regular haunt of thespians, celebs and dram-loving foreigners.

The Pot Still is the place for malt whisky in Glasgow. With over 700 whiskies, cracking cask ales, proper pies, friendly staff & great service.

The Pot Still specializes in whisky and we pride our self on finding every customer their perfect dram, with our expert staff on hand to guide you around the array of whisky from every corner of the world we are sure you will find the dram that fits. 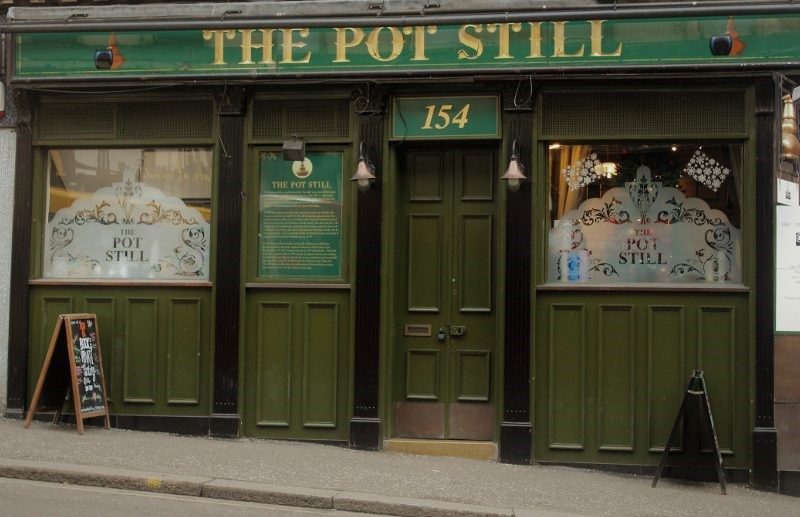