When you think of the great coastal distilleries that play on their maritime location, the usual suspects typically include the likes of Talisker, Lagavulin, Bunnahabhain, even Highland Park.   One distillery that particularly plays on its maritime theme somehow manages to continue sailing under the radar: pulteney Distillery. It’s well known to those who know it well.

Pulteney is located in the town of Wick, right up in the north-east corner of Scotland’s mainland – in fact, John O’Groats is just a further 22km north.  Wick was a major herring port in the 19th century and Pulteney Distillery was established in 1826 to cash in on the thousands of sailors, fishermen, and associated trades that descended on the town each season.  (At its peak, the town played host to over 500 coopers who worked feverishly to produce the barrels for the herring’s storage and transportation.)   The distillery experienced mixed fortunes and changes in ownership, particularly once the herring had been fished out and the industry died away.  It is one of the few Scottish distilleries to suffer the ignominy of being closed due to the temperance movement – Wick was a “dry town” from 1922 until 1947 and the distillery was closed from 1926 until 1951.

Visitors to the distillery who’ve toured other distilleries will agree that Pulteney is a quirky set up, to say the least.  A tour through the production area takes you on a twisting, twirling path between different buildings, a resulting outcome of both the small, tight space it was originally established in, together with the previous refurbishments undertaken in the 1950’s.  The stills themselves are particularly unique, unlike any other pair in Scotland:  The wash still is bulbous and squat with its head cut off (presumably to fit within what was once a much lower roof) whilst the spirit still has a unique 180o U-shaped bend at its head before passing through a purifier.

Pulteney is one of the few distilleries left to still use wormtub condensers and these, combined with the stills that induce high reflux, produce a particularly oily and weighty spirit.   With the warehouses sitting just 300m from the North Sea, it is no surprise that the resulting whisky has a notably maritime character. 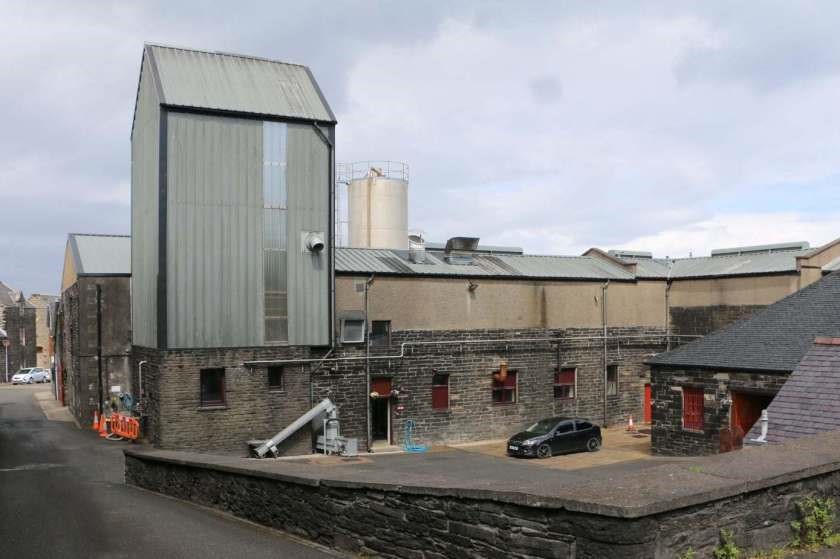 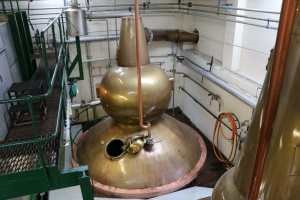 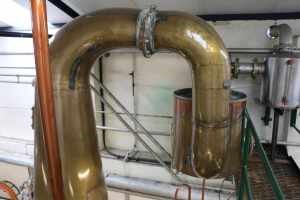 The inverted head at the top of the spirit still. 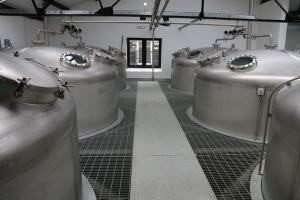 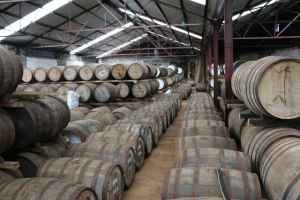 The distillery was on a five day week, equating to a production output of around 1.3M LPA.  The 5.1 tonne mashtun takes 6.5 hours for each mash, with 14 mashes running each week.  The distillery is currently using Concerto barley – there was a brief trial with Chronicle, but the results evidently “weren’t good”.  Each mash produces 23,500L of wort although, interestingly, each charge of the washbacks requires only two-thirds of this.   There are six reasonably new stainless steel washbacks, plus an older washback that was installed in 1983.  Fermentation is already at a longer-than-most 63 hours for the “shorts”, and then 110 hours for the “longs” over the weekend.  Another little quirk of Pulteney is that the washbacks have enough headspace to absorb the rising fermentation foam, and so there are no switchers or surfactants here.

The distillery has some reasonably green credentials these days – they switched off the oil gas five years ago and now use a biomass burner.  Steam from the distillery feeds one of the local suburbs (via district heating), and the distillation effluent is spread to the land, which is a win-win, noting that the land is naturally deficient in copper. 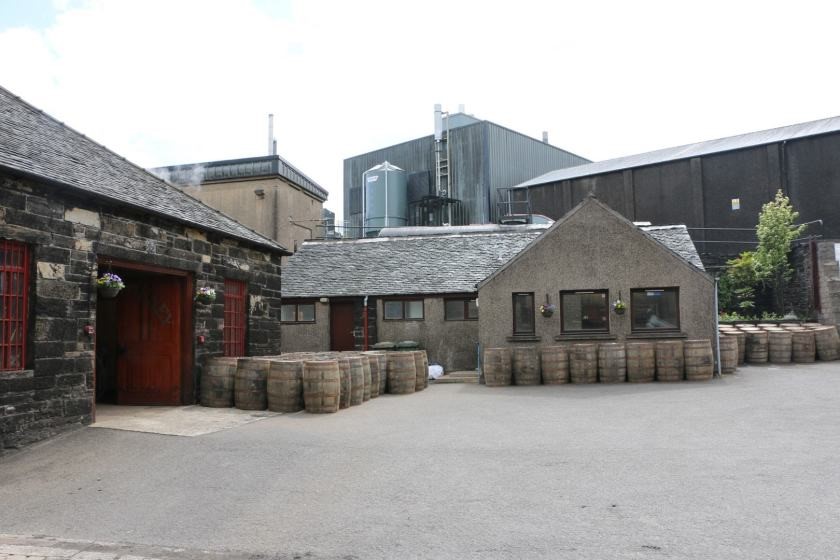 The run through the wash still takes 4.5 hours, and the spirit still is seven hours – three of which are collecting the middle cut.  For those who like the numbers, the wash still is charged with 17,500L; the spirit still with 13,500L, and 2,000L is what is finally collected.  The average strength of the spirit collected is 68% ABV, and all spirit is filled into cask at still strength.  There are five warehouses and roughly 25,000 casks on site.

Linkwood has the legend of the dents in the stills and the spider webs that couldn’t be disturbed, and Pulteney has its own version:  The kiln here was decommissioned in 1926, but two walls – still blackened by the years of fire – are exposed on the warehouse side, and there is indeed still a distinct and noticeable smokiness in the air.  The sherry butts all sit at this end of the warehouse, with the belief that the charred air and atmosphere has a unique influence on the maturing spirit at this end of the building. 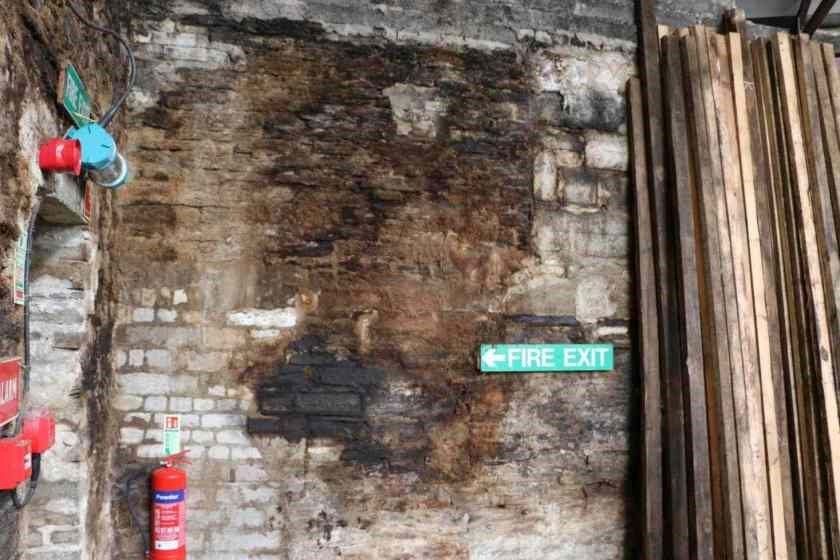 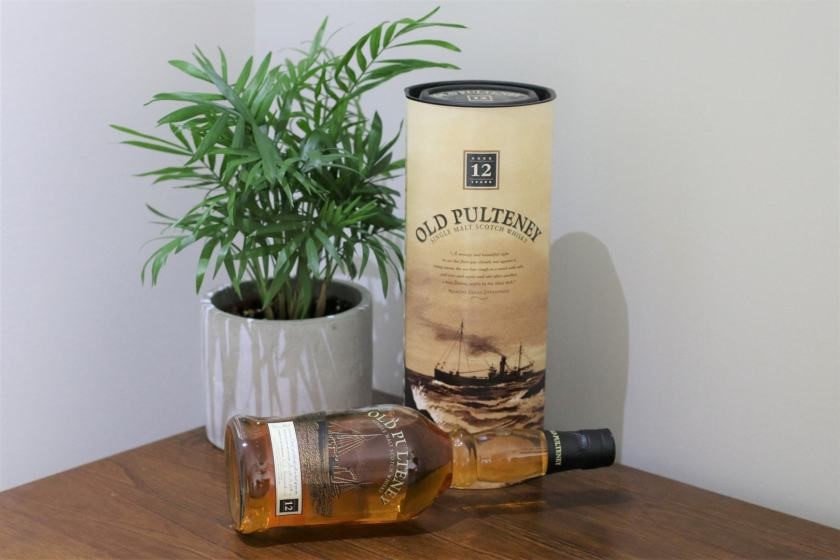 The distillery employs 12 people (including the Visitor Centre staff) and receives 15,000 visitors each year.  No mean feat for what is, ultimately, one of Scotland’s smaller and lesser known distilleries, not to mention in a geographic region far removed from the usual areas that enjoy whisky tourism.

Pulteney has been in the hands of Inver House since 1995 and they’ve quietly been building the brand over the years.  Bottled under the name “Old Pulteney” and bearing the moniker “The Maritime Malt”, its 12yo and 17yo releases have been cult favorites amongst those in the know, although the 17yo was recently discontinued as the distillery balances its stocks and projections.  Like so many other brands, the core range has expanded in recent times, and now boasts a NAS, 12, 15, 18, and 25yo.  There’s also a range of limited-edition vintage releases, plus the obligatory travel retail exclusives.  You can check out the full range.

Malcolm Waring, the distillery’s Manager, has been in the game for nearly forty years, with six years spent at stablemate Knockdhu and the rest at Pulteney!  Needless to say, he has a strong passion for the distillery, but also the industry and the local area. 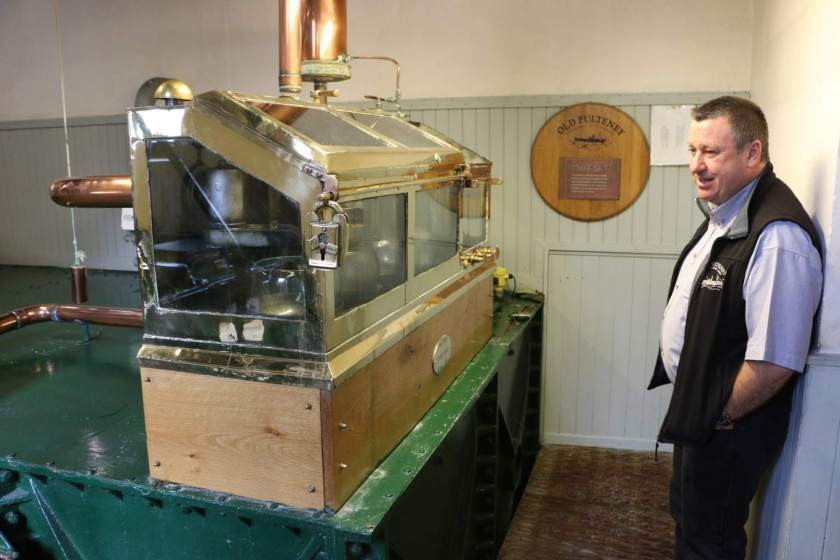 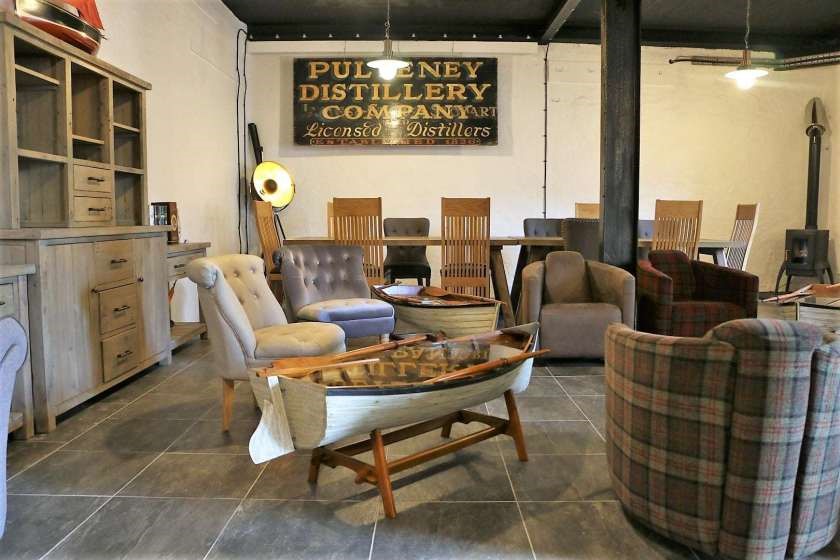 If you are able to get to this corner of Scotland, the distillery has a wonderfully cozy and welcoming visitor centre, complete with lounge, and there’s plenty of other attractions and sights in the area to justify the journey this far north.  If you’re a fan of seafood, no visit to this region is complete without dining at The Captain’s Galley – one of Great Britain’s finest seafood restaurants.  It’s up at Scrabster, just a 35 minute drive further north and – by happy coincidence – the same port where the ferry to Orkney departs, for those visiting Highland Park.