Whisky Doesn’t Need To Be Intimidating

Visit a bar serving any manner of whisky selection and you’ll likely be handed a tome listing every bottle available, usually arranged by region. It’s easy for the well-versed to navigate, but what does region, or age, matter to a newcomer? Visiting a specialty joint where options are limitless, jargon-filled and ill-explained would have been frankly scary, overwhelming and discouraging.

Understanding a few simple whisky characteristics such as  the distillery’s location, cask type, peated or not, single malt or blend – could spell the difference between being blindly overwhelmed and tentatively intrigued. 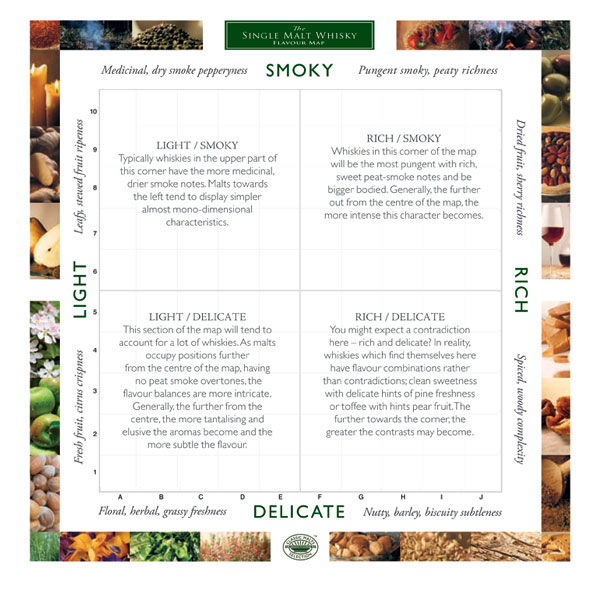 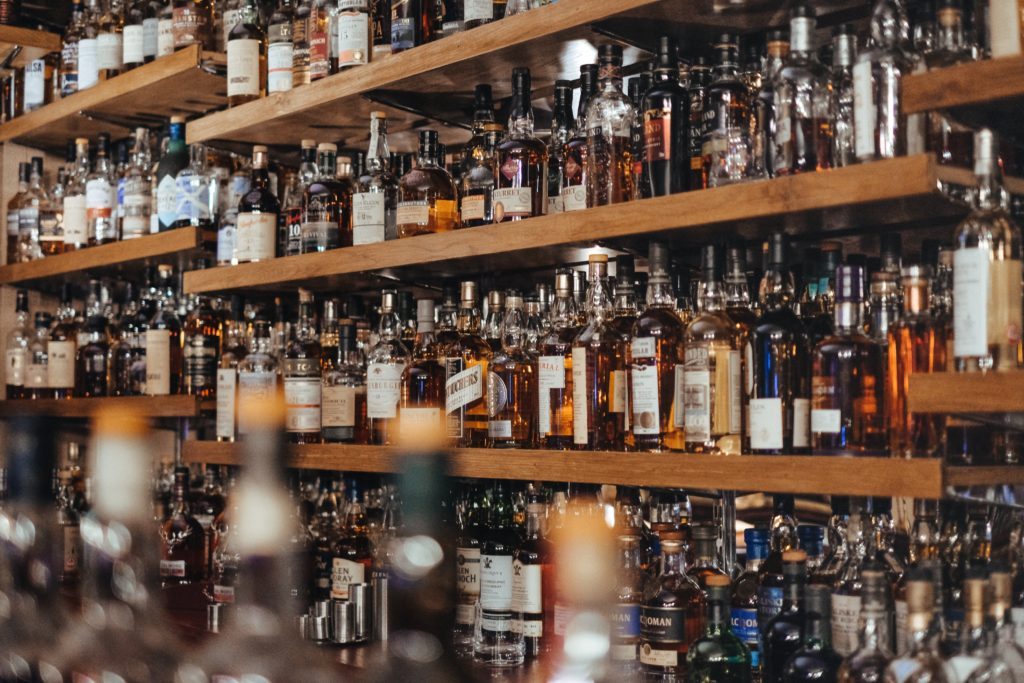 Many of us have long held the belief that the older a Whisky is the better it is. We have natuarally assumed that in almost every circumstance, a Whisky maturedd for 20 years wil be more enjoyable than say a Whisky matured for 10 years. But is a wiskies age truly indicitave of its quality? Furthermore, is it possible for a Whisky to taste older or even younger than its age suggests?

The Encyclopedia Britannica defines peat as “fuel consisting of spongy material formed by the partial decomposition of organic matter, primarily plant material, in bogs, fens, and moors.” Peated whisky is a much misunderstood and feared type of Scottish whisky, but I will try to make it seem less like a dram that an old bearded Scotsman complaining about the world would enjoy and more a dram that is as multifaceted and expansive as any other whisky out there. 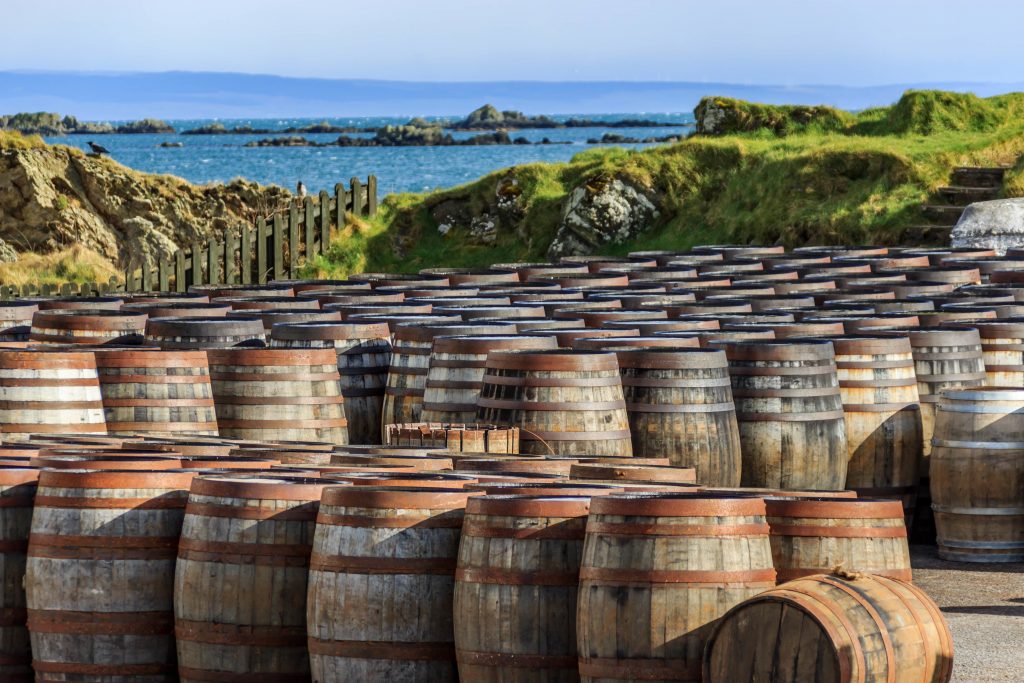 Oak. Where would we be today if it weren’t for the mighty Quercus? The world would be a bleak place, I can tell you that much. Why, you ask? Well, if it weren’t for the existence of oak, whisky would not exist! By law, Scotch whisky must be matured in an oak cask for a minimum of three years. The majority of the whiskies we enjoy today, however, are aged much longer than that, often decades. With so much time spent in wood, it comes as no surprise that a great deal of a whisky’s flavor profile can be attributed to the type of cask it’s aged in. The most common types of oak and how can you know what to look for in choosing the whisky that best suits your unique palate? Let’s have a look.

There are many things whisky lovers love to debate, but the particular question of adding water or ice to whisky has been known to ignite raging (Twitter) infernos. So herewith, a look at the history and science of the effect of temperature and dilution on our favorite libation.

The history of whisky is replete with wonderful myths and legends – the origin of the phrase “on the rocks,” meaning “with ice,” is likely one of those. Popular tales have it that Ye Olde Scotsmen would place cold river stones into their rough usquebaugh to tame some of its fire. But the OED doesn’t give us an oldest known usage, and several etymology websites date the phrase to 1946 without citing a source. Regardless, every whisky drinker has a specific expectation if they order a dram using that phrase. 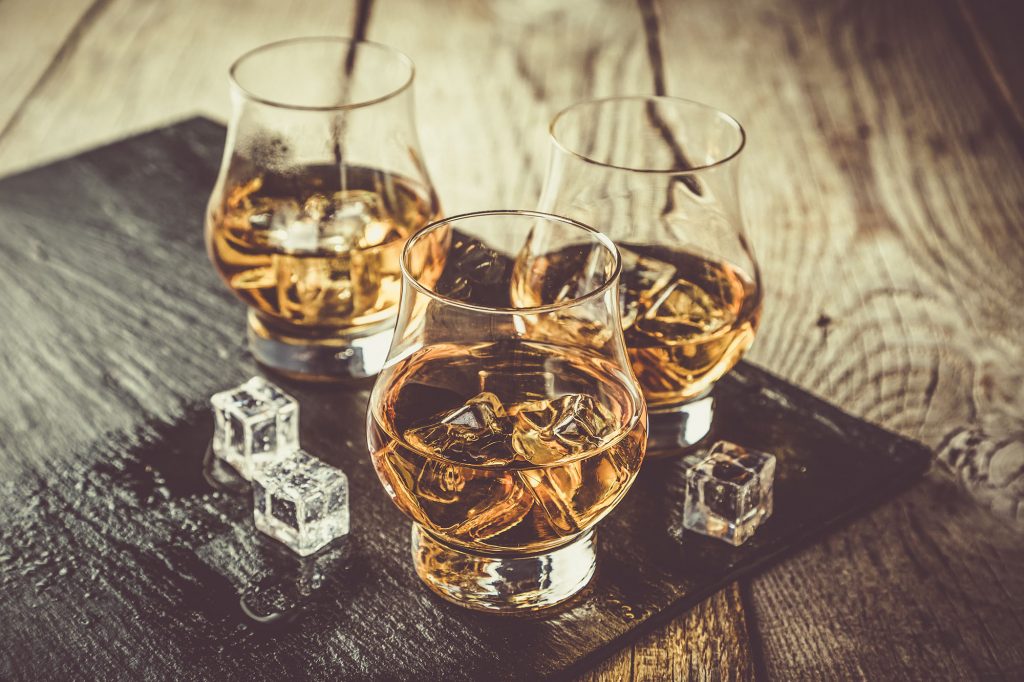 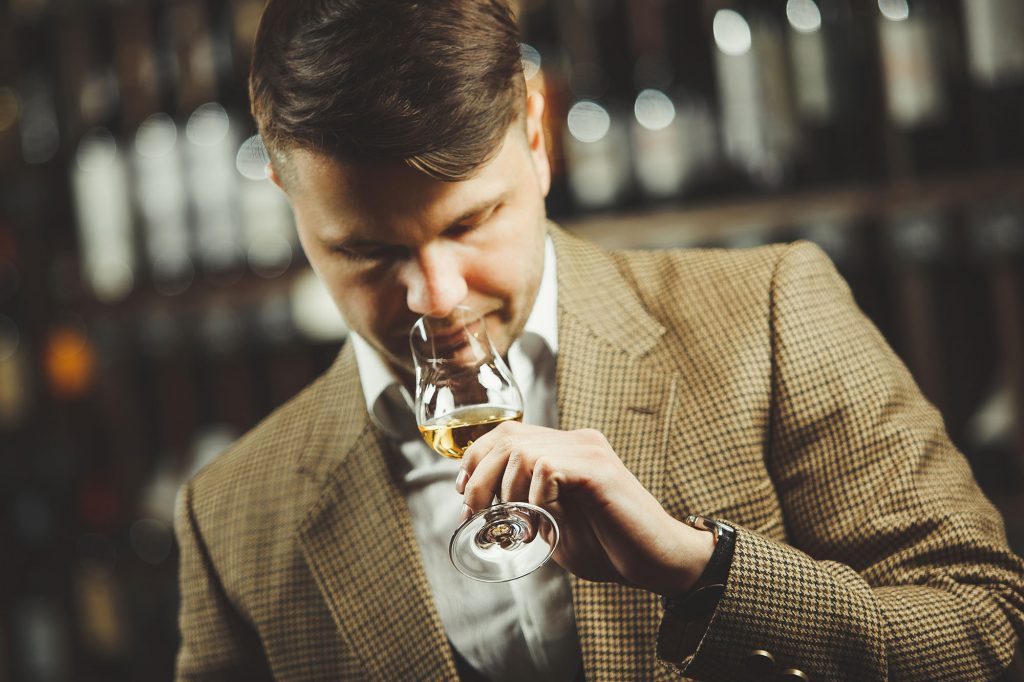 Whisky offers a bouquet of aromas in a surprisingly rich range. We need to train our olfactory memory to be able to recognize the aromatic notes found in Whisky. These aromas are also found in food and in nature. So we know them yet they are difficult for us to identify since we are not trained to recognize them blindly. Training our memory is key and is the foundation of the art of tasting.

This glass has been specially designed to help create the perfect conditions for whisky nosing and tasting. The glass is tulip shaped and it looks like a still. You are able to swirl your glass without liquid escaping, and the aromas of the whisky should gather at the neck of the glass. 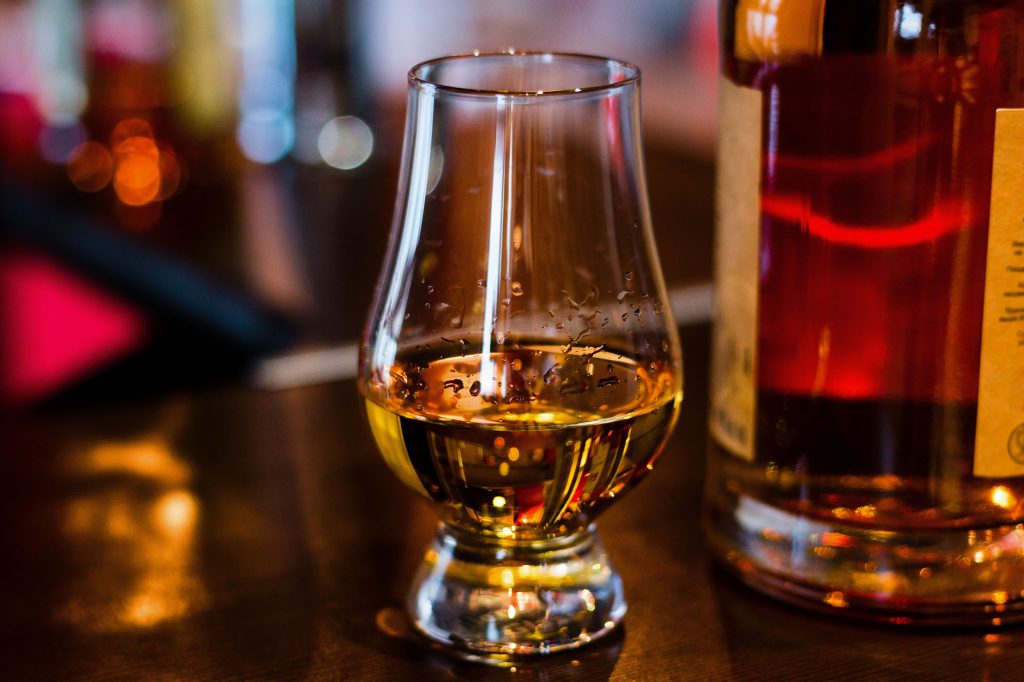 Why Scotch Distillers Are Playing With Yeast?

Yeast is one of the three ingredients used to make Scotch whisky, yet its flavor-creating abilities have been underrated for decades. Gavin D. Smith explores how distillers are now playing with uncommon strains to generate exciting new flavors. 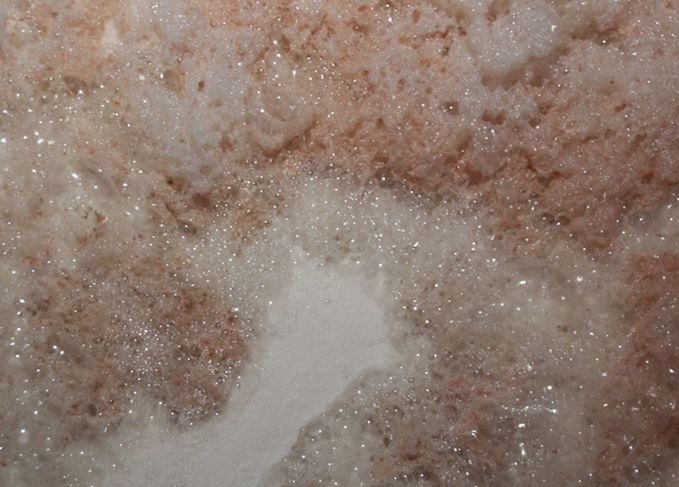 Depths of possibility: Different yeast strains are opening up a world of flavor in whisky-making.

Bubbling away: Yeast produces flavor congeners as well as alcohol during fermentation

However, as a new generation of independent whisky-makers appears, focused on the importance of flavor differentiation rather than yield maximization, yeast is one of the items that is being put under the microscope – quite literally – to explore how the use of different strains can potentially have an influence on ultimate spirit character. The movement is also supported by some of the established producers, as highlighted by Glenmorangie’s recent release of Allta, a whisky distilled using wild yeast discovered in malting barley fields close to the distillery.

Glenmorangie head of maturing whisky stocks Brendan McCarron says: ‘With Private Edition bottlings we’ve always been innovative, and for this one, Bill Lumsden [director of distilling and whisky creation] decided we should have our own bespoke barley strain. Taking inspiration from winemakers sourcing yeast from grape skins, we scraped ears of malting barley and sent that off to yeast specialist Lallemand to identify the various flora and fauna present.

‘It picked out three yeasts that had alcohol-yielding potential and narrowed it down to one. We distilled with it for one week, making sure the yeast was the only thing we changed. There were quite striking differences in the new make. Usually it is floral, clean, super-fruity, with fresh strawberries and slight cereal notes. With the new yeast it was much more floral and less fruity. It had hay, very dry grass, more cereal, and was more savory than sweet.’

McCarron says that ‘a huge part of our job is to be experimental’, and it seems highly likely that the variables of yeast will remain on the Glenmorangie radar. 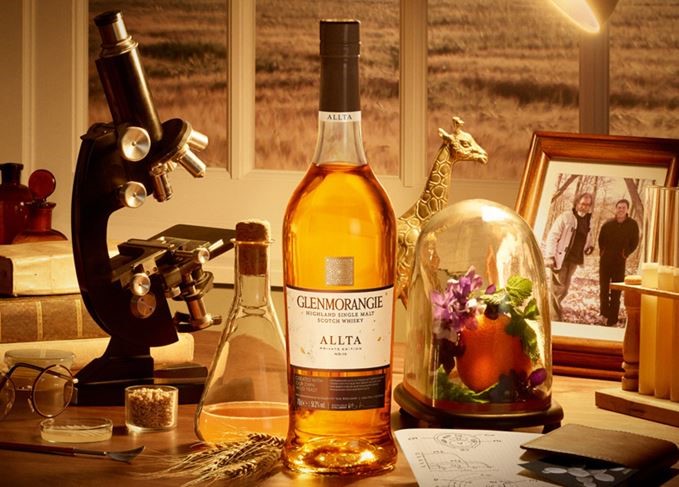 This is a spectacular Scotch, if you can still find it

Someone else with a keen interest in yeast in relation to whisky-making is Victoria Muir-Taylor, who rejoices in the title of knowledge transfer partnership associate distiller at the yet-to-be-built Port of Leith distillery in Edinburgh.

Muir-Taylor is a graduate of Heriot-Watt University’s’ International Centre for Brewing & Distilling, where she is currently carrying out her research. She says: ‘It’s a two-year project, and we’re working with strains of brewers’ as well as distillers’ yeast, and exploring mixing strains together to create a bespoke version – or versions – for Leith distillery. We currently have samples from 13 yeast strains and we are hoping to brew and distil more than 20 yeast strains. We will continue this work in the lab we’re going to be creating in the new distillery. We also want to be open with our findings and share them with the rest of the industry.’

One working distillery where yeast is taken equally seriously is Dornoch in Sutherland, established in 2016 and presided over by brothers Phil and Simon Thompson. According to Simon: ‘Yeast can produce more than 200 flavor by-products, some of which are yield-expensive and some yield-cheap. Modern distillers’ yeasts are all very similar, but there’s vast potential beyond them.

Thompson says: ‘We’ve never had distillers’ yeast in the building, and modern distillers’ yeast is not like it used to be. What we do is done at the expense of yield. We get a wide range of fermentation times, though we always work with a minimum seven days of fermentation. Primary fermentation is over after 48 hours, but after that you get bacterial and wild yeast influences. We have open-top fermenters to encourage that. He adds: ‘We’re looking for high levels of complexity, extreme fruit flavors, and especially extreme tropical fruit flavors – we’re always chasing them down. We’re looking for specific esters that create it.

‘You get huge stewed strawberry and raspberry flavors in a 1960s Springbank. You need folic acid to obtain those flavors, so we work to create folic acid by extra-long fermentation. If we wait long enough, we get those characteristics.’

Distillers in North America and Japan take their yeasts very seriously. Four Roses distillery in Lawrenceburg, Kentucky, uses five yeast strains and two mash bills to create 10 different spirits. Various combinations of these are then used to create the different expressions of Four Roses. From the mid-1960s onwards, some 3,500 different strains of yeast were developed, with around one-tenth of them still being retained by the distillery.

Meanwhile, Wild Turkey’s yeast strain has been in use since 1954, and a number of ‘copies’ are locked away in secure vaults in various undisclosed locations. Maker’s Mark has a closely-guarded ‘heirloom’ house strain that dates back some 150 years, while Jim Beam’s yeast is an 82-year-old secret wild strain, which the eponymous distiller allegedly used to take home every weekend for safe keeping.

The new wave of US craft distillers is keen to be innovative with yeast, and Corsair, for example, used Belgian yeast in its Hopmonster American hopped malt whiskey.

Japanese whisky producer Nikka employs 10 different yeast strains, according to chief blender Tadashi Sakuma, who explains that, whereas in Scotland distillers have been able to exchange malts from the many distilleries in operation, ‘in Japan, we do not have this culture of exchange nor the number of distilleries that would make that possible’. He adds: ‘Therefore, we have been developing ways to produce various different types of whisky in-house, including the development of our own yeast strains.’

Port of Leith’s Muir-Taylor reckons: ‘The Scotch whisky industry has been somewhat conservative and maintained a traditional stance when it comes to whisky fermentation. But that’s not to say it hasn’t thought about or researched it. Quite the contrary. I think it is just a bit more reserved about disclosing it. It may only be a single-celled fungus, but perhaps yeast is about to become the next big beast in Scotch whisky flavor diversification.

Ian Stirling, co-founder of Port of Leith distillery, which is to be Scotland’s first vertical whisky distillery when it commences production in 2021, said: ‘There are hundreds of commercially available yeasts and, while not all are suitable for whisky distillation, many can create unique and distinctive flavors in the new make spirit.

‘Until recently, efficiency has tended to dominate the conversation about yeast. However, we’ve already seen a few companies conducting experiments with some wonderful results reaching the market. However, Scotland still lags behind the US in terms of innovation in this area.

We want to find new flavors and styles that we can draw through to our distillate. There are a huge number of variables to consider such as how long you ferment for and at what temperature, but we firmly believe that this research will be beneficial for the industry as a whole. Currently the team is conducting trials using small-scale fermentations using commercially available yeast strains. The resulting wash is then distilled using two small, two-liter copper pot stills before being analyzed.

Muir-Taylor added: ‘We will be sharing the results of this project with the industry at large to benefit innovation and the continued growth and development of the Scotch whisky industry. ‘As one of Scotland’s key exports, it is essential that we continue to push boundaries.