Early in the 9th century, when Viking longboats were leaving the shores of Denmark and Norway to navigate uncharted waters in search of new lands to conquer, they came upon Orkney. And so our tiny cluster of 70 islands, scattered off the extreme north coast of Scotland, were swept up into a vast Viking kingdom, and ruled by a succession of Viking Earls.

Made with Pride on Orkney

Our whisky, like our island home, is shaped by a wild climate and stormy seas, and by the Vikings who settled here over 1,000 years ago, leaving their mark on our people and our culture.

Here in Kirkwall, on our ‘mainland’, Highland Park has been distilled since 1798 – on the same site as Magnus Eunson’s original illicit still at High Park. Our distillery lies almost in the Arctic Circle on a latitude of 58.9847°N, roughly the same as Anchorage, Alaska. And in fact we’re closer to Oslo in Norway than we are to London in the UK, but divided by mile upon stormy mile of water.

Unquestionably remote, our fiercely independent islands once sat at the crossroads between powerful Nordic and Scottish cultures and were ruled by the Viking Kings of Norway and Denmark. 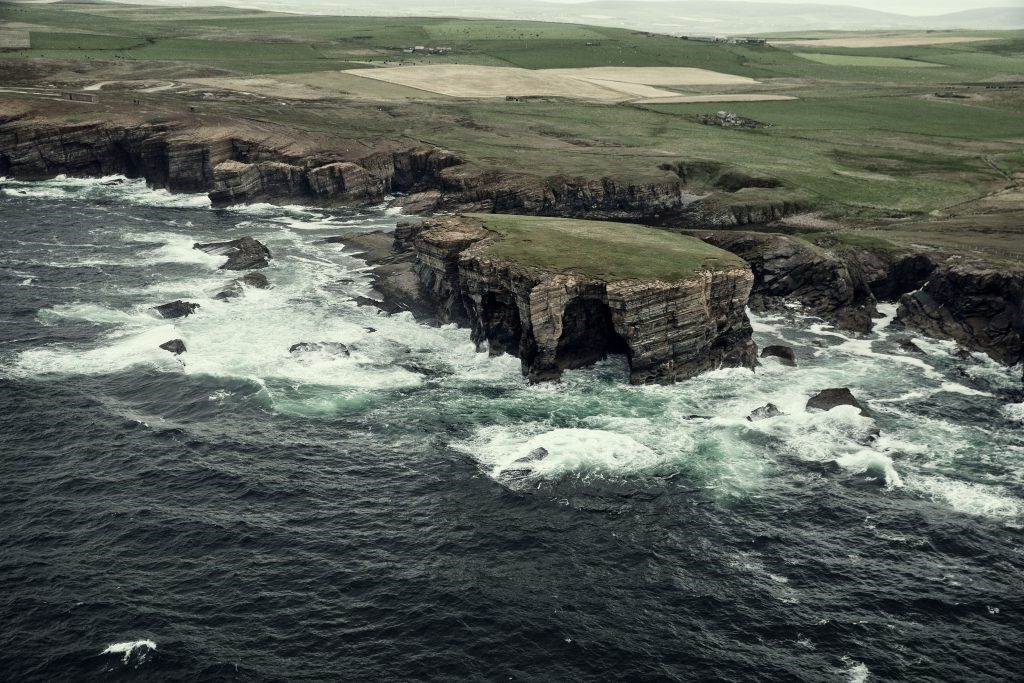 An archipelago of islands, flung in the cold North Sea

Exposed to every element and pounded relentlessly by gale-force winds from every angle, no trees can survive in Orkney’s harsh conditions – and this curious geology lies at the heart of Highland Park’s distinctive flavor.

Scattered in windswept waters, 16km from the northernmost reaches of the Scottish mainland, where the North Sea rises up to meet the Atlantic Ocean, lie the seventy or so islands which make up Orkney. Only twenty are inhabited.

From around 800AD until 1468, Orkney was ruled by a succession of Viking Earls, some extremely wise and some, it has to be said, extremely wicked. Their stories are brought vividly to life in the Orkneyinga Saga – The History of the Earls of Orkney written around 1200 and their influence lives on to this day.

The Legend of Magnus

Of all the Earls of Orkney, Magnus Erlendsson was the most celebrated. But if his life was one of virtue and wise counsel, his death was one of jealousy, betrayal and intrigue. Killed on the order of his cousin Haakon, accounts of miraculous healings around the sites of his death and burial took hold and the Legend of Magnus was born. Eventually proclaimed a saint, his remains were finally interred in St Magnus Cathedral, built in his honor some 100 years after his death. 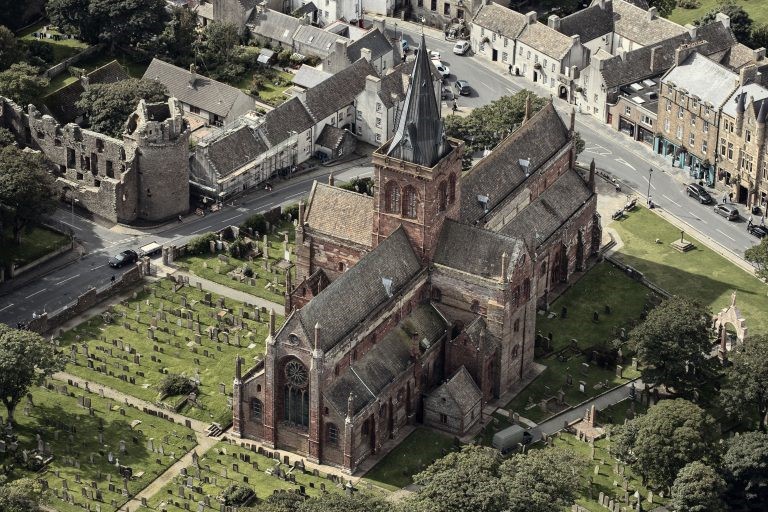 St Magnus Cathedral was commissioned by Earl Rognvald Kali in the 12th century. It took 100 years to complete, using locally quarried red and yellow sandstone. Most unusually, the Cathedral is not the property of any particular Church, but belongs to the people of Kirkwall.

Under Viking rule for over 600 years and now part of Scotland for nearly 600 years, we Orcadians still see ourselves as a band apart – we have our own distinct identity, our own way of doing things and, of course, our own flag.

In 1468, King Christian I of Norway and Denmark handed our islands over to Scotland, as part of his daughter Margaret’s marriage dowry to James III, King of Scotland. It may have ended over 600 years of Viking rule on Orkney, but it didn’t end our Viking bond. Our islands had become home to those earliest Vikings settlers – and it was a home they never left. Today, one in three islanders bears Viking DNA and we Orcadians feel strongly connected to our ancestors, sharing their pride, integrity and fierce independence. At Highland Park, we are justified in proudly stating that our whisky is crafted by modern-day Viking souls.

Our founder, Magnus Eunson, was a direct Viking descendant. A butcher and church officer by day, and a smuggler by night, he set up his illicit still at a little bothy at High Park, overlooking Kirkwall – still the site of Highland Park today. We say that our distillery was founded in 1798 – but in truth, that’s just the year that the authorities finally caught up with Magnus – whisky was certainly being produced here before that! With the exception of the smuggling operation, very little has changed in those intervening years. We stay true to the exacting standards of whisky making our founder introduced, and share his bold and uncompromising approach. In fact, you could say we’re a whisky crafted in the old way by a new generation of Vikings.

The importance of peat to whisky cannot be overstated. Ours is cut by hand from Hobbister Moor, only seven miles from the distillery. Over 9,000 years old and nearly four meters deep in places, it’s composed of layer upon layer of densely compacted vegetation – the DNA of Orkney. Under constant onslaught by ferocious winds, no trees survive on the island’s exposed and barren moor, so our peat is woodless, but rich in heather.

Our peat is cut in April, dried naturally over summer and then burned in our ancient kilns, where its heathery aromatic smoke infuses the malting barley.

We’re one of only a handful of distilleries to still turn our malt by hand. Labor intensive certainly, but it’s only this sheer hard work – the effort we put into every grain – that delivers the aromatic smokiness which makes Highland Park so distinctive.

Because malting barley produces a substantial amount of heat, we painstakingly turn it by hand, every eight hours, seven days a week, to maintain a constant airflow and exactly the right amount of moisture (5%) to fully absorb the intense aromatic smoke -‘the reek’- produced by the Hobbister Moor peat smoldering in our ancient kilns.

We’re unashamedly obsessed with casks. It starts with trees – European and American oak – carefully selected and cut into staves at precisely 45° to make it hard for any spirit to escape. Exactly how our Viking ancestors made their longships watertight!

We ship the staves to Jerez in southern Spain where they’re made into casks, filled with Oloroso Sherry and left to mature for around two years before being emptied and shipped back to Orkney to be refilled with our whisky. Expensive yes, but with casks contributing up to 80% of our whisky’s final flavor, and all of its natural colour, it’s worth every penny.

Orkney is a remote cluster of some 70 islands, scattered in stormy waters off the extreme north coast of Scotland where the North Sea meets the Atlantic Ocean, so our distillery lies almost in the Arctic Circle, on roughly the same latitude as Anchorage, Alaska. Yet our climate is surprisingly temperate, reaching highs of only 16°C in summer and lows of around 2°C in winter, perfect for a long, cool and evenly paced maturation in our island warehouses.

Creating a balanced whisky takes time and skill, but creating the intense balance that makes Highland Park stand apart also takes harmonization. We think it’s fundamental but many distilleries deem it an extravagance.

For every batch of Highland Park released, Gordon Motion, our Master Whisky Maker, selects and combines up to 150 casks, leaving the newly married spirit to rest for at least a month before being bottled. During that critical resting period, flavors from the different casks combine and harmonize, achieving an intense balance that’s delivered through our whisky’s fully rounded flavor and long, satisfying finish.